On the 29th of May 2016 we took our Sammy who fell extremely poorly to the vets for help where I was hoping he would need nothing more than a rehydration drip and a shot of adrenaline then a typical course of medicine to get him on the road to his usual mischievous self.... Instead, he was much more poorly than we ever imagined with early signs of jaundice and a very large lump on his liver. Turned out treatment was pretty much out of the question as success rate was virtually ZERO and would only prolong the inevitable giving him a much less quality of life. the kindest thing we could do would be to let him go into eternal sleep. This decision was NOT taken lightly.

Sammy was a massive part of our lives in fact within 2 weeks of my wife and I moving into our 1st house together we adopted Sammy from cats protection where we learned he was taken away from an abusive background, so abusive he was picked up on the motorway..... in a plastic bin bag..... with his throat cut.... before being thrown out the window of a moving car (only that the car behind stopped to have a look he was saved) he spent near 6 months in the rescue centre up for adoption after surgery and recovery time where he was not a very friendly cat, anyone went into his cage did so at their own risk, we were warned beforehand that if we were looking for a friendly playful cat he was not the one then we had a briefing of his background. We still went ahead and went into his cage where near instantly he came from the back corner to greet us, rubbing against our legs, letting us stroke and fuss him right up to a roll over and belly scratch. We didn't choose Sammy at all.... he chose us, and anyone who came into our home he would always greet and share some of his fur on them.

I am so happy that the past 14 years of his life with us were the best he could have wanted, he always had plenty of treats, fusses, never hungry and never thirsty, everything he needed was right there for him.

He was never far from my side no matter what, apart from now where he is no longer here to be by my side.... Instead, he is forever in our heart and memories, they last a lifetime.

Thank you, Sammy, for bringing us 14 years of happiness and joy, You really are irreplaceable and was defiantly one of a kind.

Love you and miss you so much it hurts, sleep tight little fella 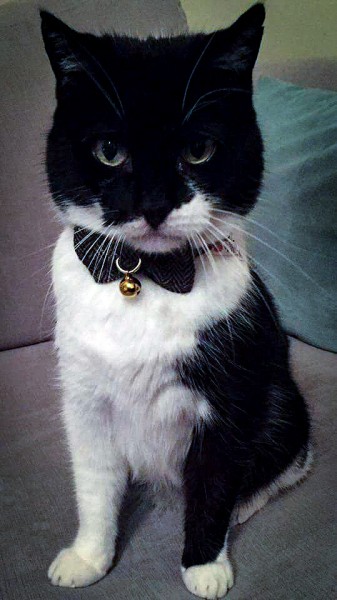